"Hope is a good thing"

In the last 90 days, I have been fortunate enough to step out of my own learning environment and participate in two exceptional events focused on education and innovation.  At the Hathaway Brown Education Innovation Summit in Cleveland, OH and Educon 2.3 in Philadelphia, PA, I was able to connect with passionate, dedicated, and wise educators who at once feel restless and hopeful about today's schools and learners.  The conversations at both conferences were diverse and compelling, addressing topics ranging from project-based learning and professional development to media literacies and empathy.  Amidst the many rich discussions emerged a particularly striking theme: how much our physical learning environments matter.

In all of my efforts to focus on my students, I've realized that I've zoomed in a bit too far.  Of course, I want to keep my community's learners at the center of our conversations, our planning, and our actions, but I cannot let that determined focus blur their surroundings.  It is a simple but profound truth that our environments shape us and can dramatically affect our capacity to thrive.  Relationships are and should be the core of any learning community, but the walls that surround us, the light that we let in, the sounds we generate, the connections we allow, and the energy that we nurture or repress can make or break a life.

In his keynote at the HB Summit, Bill Strickland reminded us, "If you build world-class facilities, you will get world-class students.  If you build prisons, you'll get prisoners."  One would think such a simple message would be self-evident, almost unnecessary to articulate, but its importance should not be underestimated.  As architects Ray Bordwell and Peter Brown shared with participants of their Educon conversation on Innovations in 21st Century Learning Spaces, research shows what an impact such elements as daylight, acoustics, air quality, color, ergonomics, space allocation, and mobility have on student learning, self-esteem, and health.  We all want to help develop world-class learners, brimming with passion, ambition, courage, hope, creativity, integrity, resourcefulness, and the capacity to thrive amid freedom rather than get lost in it.  And yet, too many of us find ourselves immersed in environments marked by stoicism, constraint, deprivation, and atrophy.  It is a crime in and of itself that one can even draw comparisons between contemporary schools and prisons.  No wonder so many of us feel restless.

Pondering the unfortunate capacity for a learning institution ultimately to "institutionalize" its inhabitants, two images from one of my favorite movies come to mind.  In The Shawshank Redemption, two former inmates of the prison are portrayed riding a bus after their release.  Their posture is shown but for a few seconds, but each pose speaks volumes.  First, Brooks Hadley is shown riding the bus to his new job bagging groceries, gripping the bar in front of him, as he was accustomed to doing for the fifty years that bars confined him. 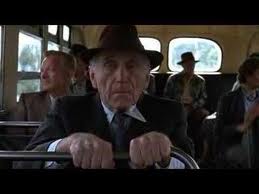 Brooks emerged from his half-century "rehabilitation" to find a world completely unlike the one in which he was forced to remain.  The pace, challenges, and freedom were completely unfamiliar, and Brooks found himself yearning for a past to which he couldn't return.  His friends reflect on the power of the building's walls and recognize that Brooks had become "institutionalized."  The character known as Red explains,


The man's been in here fifty years... This is all he knows. In here, he's an important man. He's an educated man. Outside, he's nothin'... These walls are funny. First you hate 'em, then you get used to 'em. Enough time passes, you get so you depend on them. That's institutionalized.

Indeed Brooks grew to depend on those walls and that artificial environment, and sadly, we watch as Brooks loses hope and is unable to cope.

In contrast, Red, also a long-term inhabitant of Shawshank, manages not to succumb to the same forces that crippled Brooks.  As Red rides a bus as a newly freed man, he is depicted resting by an open window, taking in the air and the sun, gazing ahead, clinging not to a bar but to hope.

It becomes clear that those walls left their mark on Red, but they did not take his life.  And with relief, we watch as Red is able to thrive.


Knowing the risks of institutionalization and the qualities the next generation needs to forge ahead, how can we apply the wisdom of Bill Strickland and the visionary architects who are designing learning spaces that help nurture world-class learners?  How can we effect positive change in the environments in which our students dwell?  How can we work to ensure that our schools not only better align with real life but are real life?  How can we create communities that poise each learner to leave our schools with a posture of empowerment and optimism?  These are the kinds of pressing issues that passionate educators are tackling together with the belief that our learning institutions can do better.  Ask those who have participated in events such as Educon, and most will attest to the power of such gatherings to energize, invigorate, and restore our faith in one another and our students.