Every year I introduce my students to the StoryCorps project.  Diving into a treasure trove of recordings of everyday people sharing stories of love, loss, struggle, humor, and wisdom is a joy and one of the most powerful catalysts for empathy development I've found.  I challenge my students to listen, to connect, and to reflect on the media used and how it impacts each message.

I invite my students to share the stories that moved them, and as a culminating project, our class creates our own StoryCorps site.  We have fun, we open up, and we learn more about each other than we thought we could.  I've always sensed that my students appreciate this experience, but a recent tweet from a young woman I taught four years ago brought some validation.

As time marches on, I find that sites like StoryCorps and the Library of Congress's American Memory Project prove to be priceless teaching resources.  As many of us find ourselves texting more and sometimes talking less, there is something incredibly powerful in actively appreciating the human voice.  I have felt this for years.  But never more so than a few weeks ago when I found a broken cassette in a shoebox in my own basement.

Given the countless number of mix tapes I accumulated during my childhood, I'm surprised this particular cassette even caught my attention.  But it did.  It was nearly unmarked, but there on the faded label was my late mom's unmistakable penmanship.  There were just a few numbers written; they were first three years of my life.

Even with an awareness that it might just be blank, I was as eager to listen to it as I was disappointed to realize it was unplayable in its current condition.  I wondered who might be able to try to salvage it.  So, I took to Google.  Sure enough, I found hope.

After some online research and a reassuring phone call to audio engineer, Mark Lyon, in Santa Rosa, CA, I mailed the tape off, with extra bubble wrap and a tracking number that I held onto tightly.  Two weeks later, back in my hands was that tape.  Fixed and digitized on a disc.  My hands shaking a little, I pressed play.

For the first time since she passed away thirteen years ago, I heard my mom's voice.  It turns out that for years, she had kept a tape recorder handy and captured us "talking" to one another.  Baby sounds, singing, a play-by-play of my then three year-old brother trying to take over my playpen.  An interview with my great-grandmother, who shared through contained laughter that growing up with three brothers, she "had to learn how to fight... and [has] never stopped."

Tears.  Happy, grateful ones.  And many of them.

If I could find words to describe how it felt to hear her voice again, I would, but I can't.  At least for now. 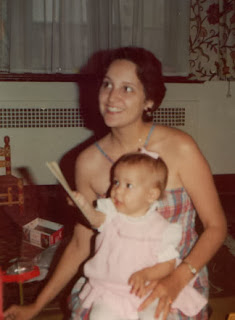 What a gift that I will take great strides to preserve, cherish, and share with anyone who loved her.  What a privilege to have the means to restore old voices and capture new ones today with relative ease.  I hope we can find a way not to take that completely for granted.  I'd love to hear what my students have to say about that.

I can't help but wonder if there's any more lost media of my loved ones in an attic or a basement somewhere.  Guess what I'll be doing this holiday at Dad's house.  In the meantime, I am immeasurably thankful for this gem, for the connection it has just strengthened, and for the joy that it brings to me.  Most of all, I am thankful for the story that my mom started and which I have the privilege to help continue.